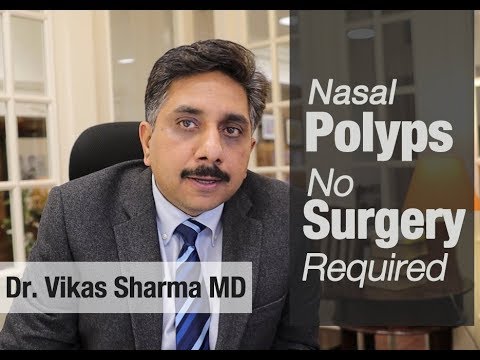 Nasal polyps are soft growths arising from the mucous membrane of the nose or paranasal sinuses. These growths are painless, freely movable and non-cancerous. Homeopathic medicines for nasal polyps help treat the polyps for the long term and can help avoid surgery.

Lemna Minor is one of the top grade medicines for nasal polyps. Lemna Minor works well where there is obstruction of nose and loss of smell from nasal polyps. A putrid smell in the nose may also be felt in some cases. Thick, yellow-white discharge from the nose is another attending feature. In some cases, mucopurulent nasal discharge is observed. In cases where nasal polyps worsen in wet weather too, Lemna Minor is the medicine to prescribe. It also treats swollen nasal turbinates very well.

Teucrium Marum is a most wonderful medicine for nasal polyps with marked nasal blockage. A unique symptom is obstruction of the side of the nose on which the person lies down. Loss of smell is also noted. Crawling sensation in the nose may arise. Teucrium Marum is also one of the best medicines for ozaena. Ozaena is chronic inflammation of the nasal mucosa resulting in its atrophy.

Sanguinaria Nitricum and Kali Nitricum are excellent medicines for right-sided nasal polyps. A person who needs a prescription of Sanguinaria Nitricum shows watery, nasal discharge or burning nature. Other features are pressure over the root of the nose, plugged sensation in nostrils, enlarged nasal turbinates, sneezing and yellow, bloody mucus discharge from the nose. The symptoms guiding the use of Kali Nitricum in addition to right-sided nasal polyps are coryza with nasal obstruction, sneezing, loss of smell and digging pain in nostrils.

Calcarea Carb is an extremely suitable medicine for left-sided nasal polyps. This prescription is given to persons who complain of a blocked nose on the left side. Other attending features are fetid smell and yellow discharge from the nose. In the morning, dryness in the nose may be felt. Sneezing, markedly in the morning time, may also attend. Persons given Calcarea Carb tend to catch a cold easily, with the slightest change in weather.

In the case of nasal polyps with constant sneezing, Allium Cepa offers the perfect treatment. An attending feature is the watery discharge of burning, acrid nature from the nose. The nasal discharge corrodes the upper lips. Headache may also persist along with fluent coryza. Some feel there’s a lump at the root of the nose. Nose stoppage may also be observed.

For postnasal discharge in nasal polyps cases,  Kali Bichromicum is selected. The post nasal discharge is thick, lumpy, ropy in nature. It is attended with much hawking. Marked pressure at the root of the nose is complained of. A fetid smell from the nose is another concern. Violent sneezing in the morning time may accompany the above features. Kali Bichromicum is also a prominent medicine for treating nasal polyps from chronic sinusitis.

Phosphorus is a very effective medicine for nasal polyps that bleed easily. Apart from the bleeding, the condition is accompanied by coryza with dull headache and sneezing which worsens with strong odors. Blocked nose early in the morning is a sure sign that Phosphorus will work. Also, in cases where coryza and dryness of the nose alternate, Phosphorus is the best medicine.

1. Why do you get nasal polyps; are there any risk factors that predispose one to this condition?

The exact cause of nasal polyps is not yet clear. However, risk factors like chronic nasal infection or inflammation, sinusitis, and nasal allergies play an important role in making one prone to nasal polyps. It needs mention here that not everyone with the above risk factors will develop nasal polyps even though they would be likely to develop the condition. Various other diseases that are associated with nasal polyps are asthma, cystic fibrosis, chronic rhinosinusitis, allergic fungal sinusitis, and aspirin sensitivity.

2. How do I know I have nasal polyps?

There are several symptoms unique to nasal polyps, the most prominent among these being a stuffy nose. Other signs accompanying the nasal blockage include breathing through the mouth, loss or decrease of the sense of smell, snoring, post nasal drip, sneezing, runny nose, headache, feeling of pressure in the forehead. Polyps that are small in size show no symptoms at all.

3. What medical investigations do doctors propose for nasal polyps?

Investigations for nasal polyps include nasal endoscopy, CT scan or MRI. In addition to this, skin prick tests to detect allergic factor are also done.

4. What are the various types of nasal polyps?

5. Can sinusitis cause nasal polyps?

6. Are nasal polyps related to allergies?

Yes, they are related to allergies. Recurrent nasal allergies cause inflammation of the mucous lining of the nose i.e. rhinitis or of the paranasal sinuses i.e. sinusitis. Both rhinitis and sinusitis put the person at a high risk of nasal polyps.

7. Is turbinate hypertrophy another name for nasal polyps?

No, nasal polyps and turbinate hypertrophy are not the same thing. Turbinates are the normal structures i.e. curled bones located bilaterally inside the nose. They play an important role in heating and filtering the inhaled air. While nasal polyps are soft, painless growths arising from the mucous lining of the mucous membrane of the nose or paranasal sinus. However, the major risk factors for both turbinate hypertrophy and nasal polyps are recurrent nasal infections and nasal allergies.

8. Can nasal polyps be cancerous?

No, nasal polyps are not cancerous. They are benign growths.

Yes, nasal polyps can bleed, but not in every case.

10. I snore at night, could it be from nasal polyps?

Snoring is a symptom of nasal polyps. But, snoring in isolation can be attributed to other causes as well. Few other causes of snoring include enlarged adenoids, deviated nasal septum, obesity leading to bulky throat tissue and elongated uvula. A CT scan or MRI will confirm whether the nasal polyps are causing snoring or other factors are in play.

11. Can nasal polyps affect my ability to smell?

Yes, nasal polyps do reduce a person’s ability to smell.

12. Can nasal polyps give me ear infection or affect my hearing?

Yes, there are chances of ear infection if a person has nasal polyps and hearing may be affected.

Nasal sprays only provide temporary relief in nasal symptoms from nasal polyps. However, complete treatment can only be obtained by treating the root cause with proper medicines.

14. My doctor has advised surgery for nasal polyps, is it safe to put it on hold and go for natural medicines?

Yes, it is absolutely safe to do so as nasal polyps are benign growths. Homeopathy acts at the root and in due course dissolve nasal polyps without having to go through any invasive procedures or surgery. Homeopathy initially controls the symptoms of nasal polyps. In time, the nasal polyps start to shrink in size and dissolve.

As much as finding the allergens that cause nasal polyps, avoiding these allergens that one is susceptible to are important. Staying away from irritants like dust, strong odors, cigarette smoking, and pollution will also help.